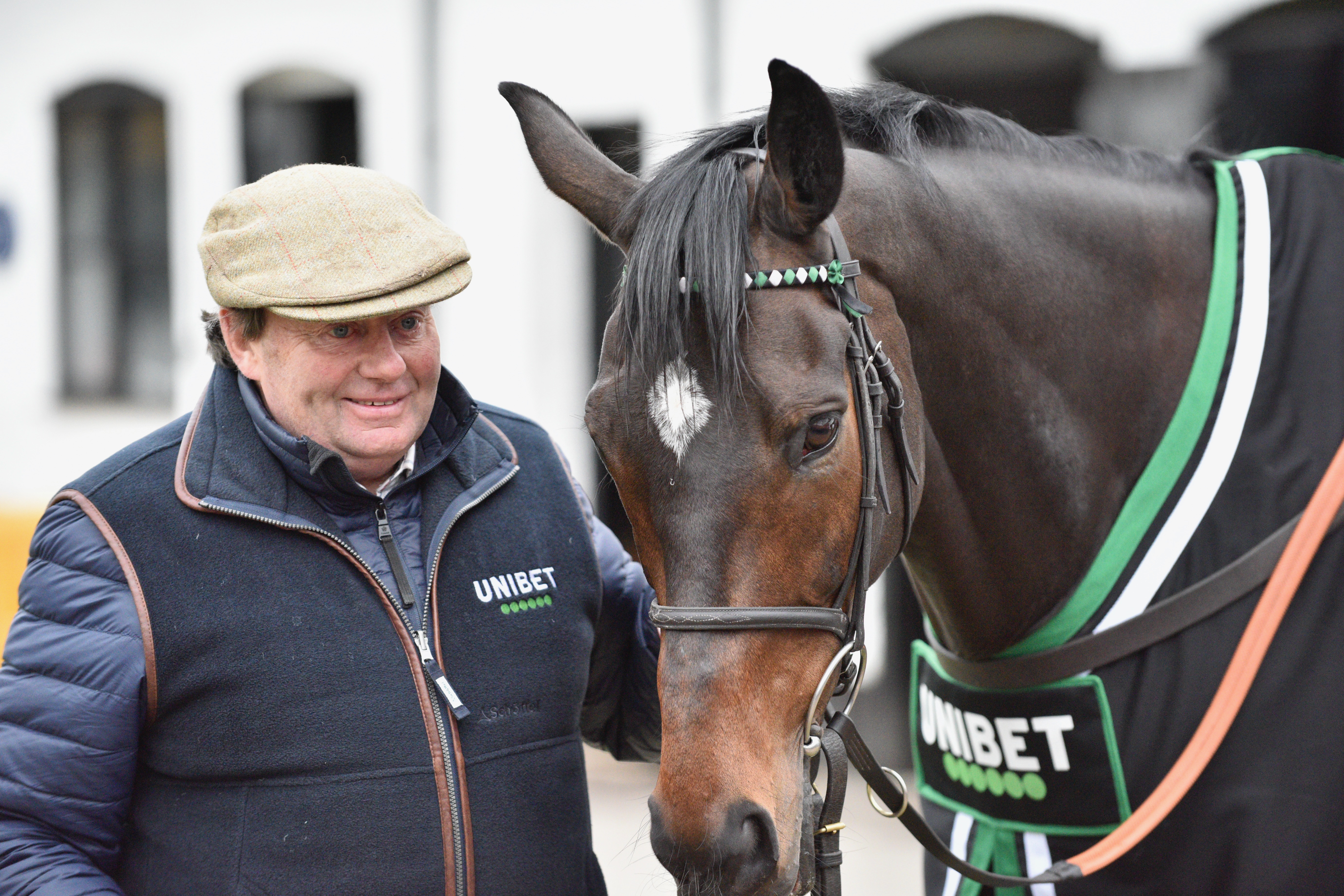 Another year has flown by as we eagerly anticipate the Cheltenham Festival, and that means the obligatory media visits to some of the bigger and more powerful yards for a chat about their charge’s chances.

Monday saw me head on down to the Nicky Henderson stable at Seven Barrows to visit the challengers housed there as Nicky looks to catch or even overtake Willie Mullins as the most successful trainer in Cheltenham history.

After so many years at the top of the game Nicky is very media savvy and he even persuaded the rains to stay away for the majority of the time, as he paraded his horses and then spoke to us about his top prospects.

Others attacked their keyboards within moments of any interviews, with plenty trying to put words in to Nicky’s mouth “Horse X has a great chance in Race Z doesn’t he Nicky?”, which to me defeats the objective, and I prefer to sleep on things and try to read between the lines and even dare to interpret his body language – hence this day late assessment.

Naturally, with one of the largest strings in training, going through all his horses would be unrealistic, and as the handicap ratings aren’t out officially until next week there was little to no point in picking his brains there. That meant we worked through the stable stars instead, though the winds and busy stable schedule meant we only got to see a few of them in person. Enjoy.

First horse out was of course Altior, currently available at odds of 4/1 for the Champion Chase as he looks to win the race for the third year in a row at the age of ten. Nicky basically admitted (with the benefit of hindsight) that running him over two miles five on soft ground against Cyrname first time out for the season was an error, and that it exhausted the horse far more than hoped or expected.

Not seen again between November and February, Nicky insisted we should look on his comfortable if not exciting win at Newbury as his first real race of the season and, if we do, then he ought to improve and go to the Queen Mother with a far better chance than those odds suggest, especially for a horse who has only lost once over fences.

Value for money was the order of the day next with not one but five Champion Hurdle hopefuls paraded for us to admire. Epatante, Pentland Hills, Verdana Blue, Fusil Raffles and Call Me Lord will all run if everything is well and, although Epatante is as short as 11/4, I honestly felt Nicky was leaning towards two others.

His body language suggested Verdana Blue would be the best of them if she gets her ground but one glance out of the window at yet more rain creates an issue there. If the winds come and the going is good to soft or faster, I may well have a saver on her regardless, yet Nicky kept coming back to Pentland Hills. The Triumph Hurdle winner hasn’t been at his best yet this season but has had a small wind op since finishing second at Haydock and at odds of 5/1 I might yet be tempted.

Having sorted both the Champion Hurdle and the Queen Mother Champion Chase (I wish it was that easy!) we have the little matter of the Gold Cup on Friday afternoon where Santini seemed in very good sorts…

Second in the RSA Chase last year after a terrible preparation following foot issues and last minute flu vaccinations, Nicky was amazed to see him finish as close as he did (half a length adrift of Topofthegame), and reports that this season has gone pretty much as expected. A winner last time out in the Cotswolds Chase (which was always the plan), he saw off a spot on Bristol De Mai on ground heavier than ideal and, with plenty more to come (Nicky’s words not mine), he looks to have a lively chance of success, though it is a ridiculously competitive renewal.

Running through the others in brief (and not all of them, obviously) and we have to start in race one on day one (the Supreme Novice Hurdle), when Nicky is very keen on the chances of Shishkin who will probably be the only runner for the stable come race day. Nicky said:

“I would like to think that Shishkin is one of our best chances of the week. He is a genuine two miler. The Supreme is a nice race to win if you can because it gets the ball rolling and the pressure off a bit.

“I think Shishkin is very good and in his bumper and novice hurdle, he has looked very efficient. He has got to prove himself yet and this will be a much bigger test, but visually he has been very impressive. He does not seem to lack experience, as he races very professionally, and then you can press a button, which makes life easier for him”.

If that is correct, we could well see a winner on day one to get the ball rolling, though the Irish may well have other ideas!

Others worthy of a mention include Floressa “I think she has a great chance” (Mares Novice Hurdle), Might Bite (Cross Country), and Welsh Saint (10/1) and Diablo de Rouhet each way (25/1) for the Pertemps Final (both considered well handicapped), though any winners at Cheltenham are always welcome as Nicky will happily tell anyone who asks.

Next week – off to Paul Nicholls weather permitting!