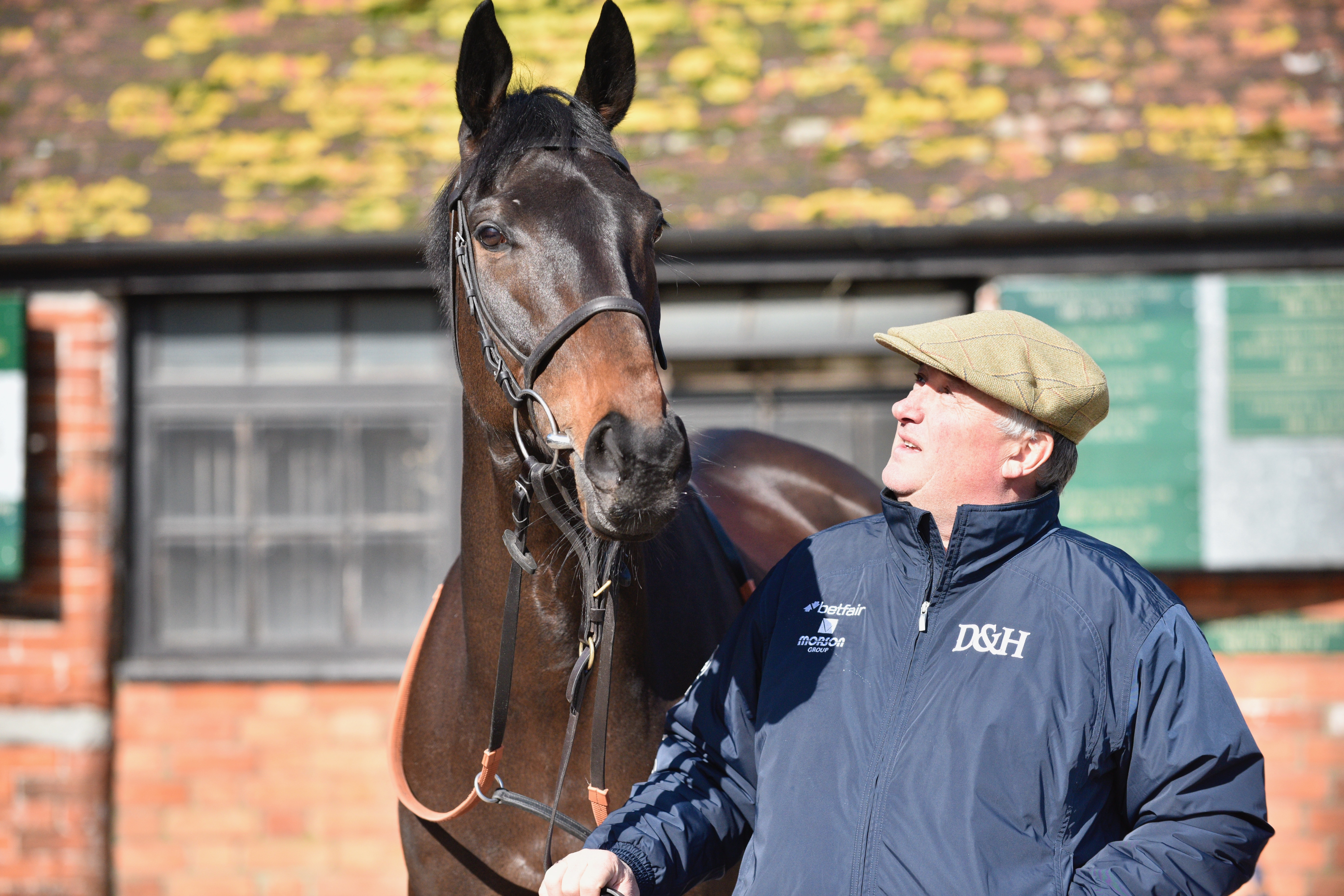 On Thursday morning we went to see Paul Nicholls to discuss his team for Cheltenham. Massive thanks to Paul for his hospitality, as we started with a look around the whole yard (and the chance to pat a few horses up close), before regrouping at the front to listen intently and snap off a few photos to boot.

With a huge string of some of the best horses in the country we were limited to realistic numbers and I leave it up to you to decide if those he paraded are in fact his best chances, but we certainly saw some equine superstars.

Starting at the very top of the tree and the master of Ditcheat seemed delighted with the well-being of Gold Cup hope Clan Des Obeaux. He looked a picture to my eyes and worked well with Frodon at Wincanton according to his handler who also told us:

“Last year, we went from Kempton to the Denman Chase, which was put back a week, and then to Cheltenham. We are coming in with a different preparation this year because we have worked out that he is best when fresh. His best runs have been from Haydock to Kempton last season and then this season from Down Royal to Kempton. He is only eight and is bound to have improved.”

Fair to say he seems pretty keen on his chances and at 8/1 I won’t be putting anyone off, though that is three “tips” from trainers already in the last seven days and that’s before I visit Colin Tizzard on Monday!

Politologue and Diamond Dollars were brought out next and both head off for the Champion Chase which may yet be the race of the meeting. Paul pointed out that Politologue was giving Defi Du Seuil weight at Cheltenham in November and that he goes best fresh (hence his break), and in his words”

“He has had a great preparation and it does not matter how much it keeps raining because that will suit him. I think at 33/1 he is a lively outsider in the Champion Chase. He was not beaten far last year and basically jumped the last upsides Altior. He comes right at this time of the year and I was very happy with him this morning.”

Solo caught everybody’s eye next but it has to be added that even his trainer seemed slightly surprised by how easily he won last weekend, despite holding him in the highest regard. That win has seen him become the highest rated novice hurdler in the UK (157) which seems an over the top reaction, but as he is unlikely to be going down the handicap route, who cares?

Described as “…a big tank of a thing who takes loads of work…” he seems sure to keep on improving and, if that is correct, he can win the Triumph Hurdle before moving on to even bigger things over the years ahead, with fences the eventual aim.

Sir Psycho also runs in the Triumph and could well give the stable a one two, but others are worthy of a mention in other contests including Greaneteen, who is rated 150, which Paul seems to think is at the very least a workable mark. Although he thinks he is good enough to run in the Arkle, his mark seems to be swaying connections toward the Grand Annual instead where he looks to have every chance.

Finally, Thyme White heads off to the Boodles Juvenile Handicap Hurdle and is yet another with a live chance of bringing home the bacon. Paul told us:

“He has a rating of 133 and I think he can do something off that mark. He is progressing and the Boodles is a race we have done well in. I would think this lad will have a leading chance. He is a proper horse who will make a lovely chaser one day.”… and that concludes my stable tours, for now.