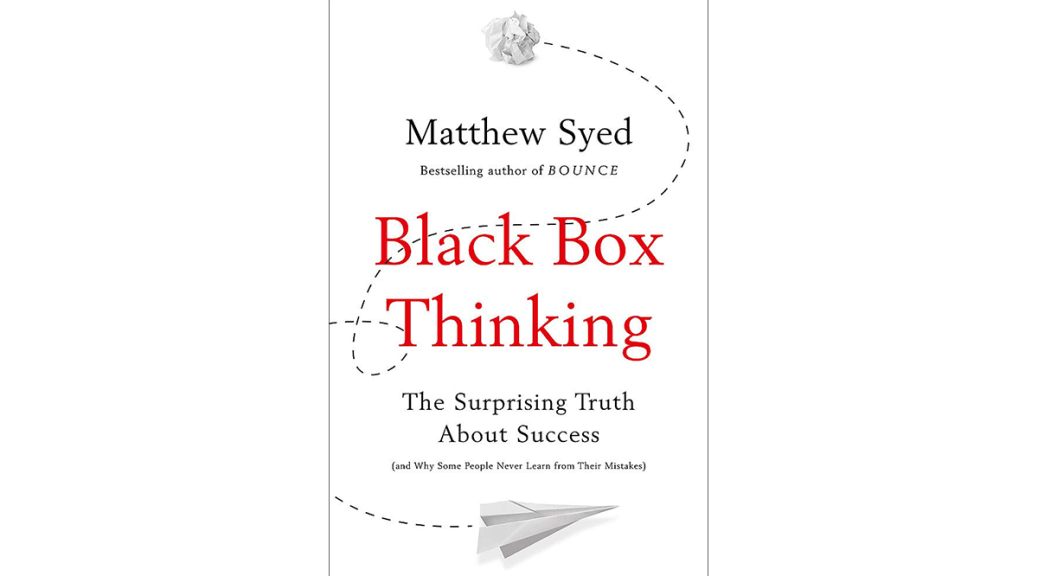 Over the last couple of weeks, on the recommendation of Bet Chat Bec, I’ve been reading a book called Black Box Thinking…

Generally, it’s not the sort of thing I’d go in for. Whenever I see a book related to business or ‘self-help’ my mind tends to generate the following words and phrases:

However, this one grabbed me from the start and hasn’t let go…

And before I continue, I should point out that I’m not on commission to sell the book!

The reason it’s so good is three-fold:

The power of failure

One of the key ideas throughout the book is that – despite societies’ attitude towards it – failure is a good thing.

You see, it’s not that anybody wants to fail, but rather that failing is necessary in order to evolve and get better.

This extract from the book is a good example:

Rick had the idea of creating a web service that would allow people to post simple text articles online. He had this idea well before the blogging revolution. He could sense the potential and worked on it 15 hours a day.

Soon he had a working prototype. But instead of giving consumers the chance to use it, perceive its weaknesses, and then make changes, he decided the software would run more efficiently if he could design a more sophisticated programming language. He spent the next four years designing this new language. It proved disastrous.

“Over the next four years, he got more and more mired in technical details and lost sight of his original idea. Meanwhile, other entrepreneurs began to build blogging platforms that were neither perfect nor technologically advanced.

“The difference was that they quickly put their flawed efforts out into the world for others to try. In doing so, they received crucial feedback, evolved their software, and made millions of dollars.”

When it comes to devising your own betting strategies, nothing you can do will be more beneficial than testing out as many different options as possible…

After all, what do you think has more chance of success?

Spending weeks or even months coming up with an idea, weighing up the pros and cons, researching various potential parameters, writing down what you think is the optimal method and THEN testing it out or…

In the first example, you will have spent weeks or months and there’s every chance the strategy will turn out to be unprofitable when it’s tested. In certain circumstances, you may even find that you’ve waited so long that the initial edge which caught your eye no longer exists as the bookies have cottoned on while you messed around!

In the second example, you’ll more than likely test multiple unprofitable strategies, but with each failure you’ll learn something new and get closer to something that works.

What are you scared of?

Much the same thing applies to trying out tipsters if you don’t have the time or inclination to come up with a winning betting strategy yourself.

Most people who won’t try a service (assuming there’s a money back guarantee and it’s from a trustworthy company) justify it to themselves in one of the following ways:

“It sounds too good to be true.”

“It won’t work anyway, so what’s the point?”

But let me ask you this…

If the service comes with a money back guarantee, and you can paper trade the selections (I.E. not bet on them using real money), what are you afraid of?

The worst case scenario is you lose a few minutes spent monitoring the selections. The best is you find a seriously profitable additional income stream.

It pretty much comes down to this…

The reason why most people don’t try things out, evolve their thinking and, ultimately, become successful, is because they’re scared of failing.

That’s entirely the wrong way to think of it: all that any failure actually does is teach you something and bring you that little bit closer to success.